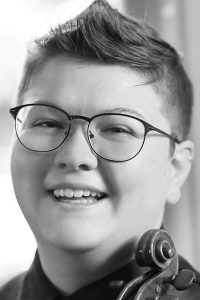 Twenty-five year-old violinist Abigail Fayette, from Wading River, New York, is the youngest of four children in a musical family. Ms. Fayette first picked up the violin at age three beginning her studies with her mother. In 2004, Ms. Fayette entered the Juilliard School’s Pre-college Division as a scholarship student of Ms. Shirley Givens. Other teachers she has studied with include Ann Setzer, Kyung-Wha Chung, Joseph Silverstein and Ida Kavafian. Ms. Fayette received her Bachelors degree from The Curtis Institute of Music and recently completed her Masters degree at New England Conservatory under the tutelage of Soovin Kim.

Ms. Fayette made her Lincoln Center Debut at the age of 10 as the winner of the Juilliard Pre-College Chamber Orchestra concerto competition. Since then, she has won several other competitions such as the Bachanalia Orchestra Concerto Competition and was named alternate for both the Tchaikovsky and Glazunov violin concerto competitions at The Juilliard School Pre-College Division. Ms. Fayette has performedin Carnegie Hall, Merkin Concert Hall, The Kimmel Center’s Perelman Theater, and New England Conservatory’s Jordan Hall as a soloist, chamber musician and orchestral performer. A frequent participant in The Curtis Intsitute’s touring program, Ms. Fayette has toured within the United States as well as Europe. During the 2016/17 season, Ms. Fayette toured with the Curtis Chamber Orchestra as a soloist performing Mozart’s Violin Concerto No. 2 in D Major along with four other students, Shmuel Ashkenazi, and Roberto Diaz.

In addition to performing as a soloist, Ms. Fayette has served as concertmaster of the Curtis Symphony Orchestra and the New York String Orchestra Seminar during the 2014/15 season. An avid chamber musician, Ms. Fayette has collaborated with artists such as Hal Robinson, Gary Hoffman, Steve Tenenbom, Kim Kashkashian, Samuel Rhodes, Peter Wiley, and Joseph Silverstein. Ms. Fayette has participated in several summer programs including Music from Marlboro, The Taos School of Music, Kneisal Hall, Music from Angel Fire and the Tanglewood Music Center. This summer she will return to Music from Marlboro.